Gender inequality is one of the prominent issues of today’s world. Each of the problems at the root of gender inequality weakens the possibility of achieving sustainable development targets on this issue. It is necessary to take urgent action and helpful steps in this regard.

In 2015, Hacettepe Institute of Population Studies (HIPS) conducted one of the exemplary works in this area, which was titled “Research on Domestic Violence Against Women in Turkey”. This research is a follow-up study of the 2008 research conducted by a consortium in partnership with HIPS, and acts as a resource for efforts on combatting with violence against women, and raising social awareness and sensitivity toward this issue. Click here to access the full report.

One of the exemplary efforts in this regard was conducted by Hacettepe University Women’s Research and Implementation Center (HUWRIC) with the “Strengthening Access to Sexual and Reproductive Health and Sexual and Gender Based Violence Services for Syrian and Other Refugees thru Women and Girl Safe Spaces (WGSS)/Women Health Counselling Units Project”. This project was carried out between 2015 and 2019 in collaboration with Ankara Health Directorate as well as the United Nations Population Fund (UNFPA), and with the financial support of European Civil Protection and Humanitarian Aid Operations (ECHO). It aimed to provide safe spaces for migrant women and girls as well as health counselling services. The Project started with a single center in March 2015 and continued with three centers between 2016 and September 2019.

Two recent publications of the project are the book titled “Life Stories of Women Who Migrated to Ankara From Syria Due to the War in Syria from a Gender Perspective”, which was published in 2019, and the book titled “Research on Determining Sexual and Reproductive and Gender Based Violence Service Needs of Syrian Women Applied to Women’s Health Counselling Centers”, which was published in 2019.

Additionally, Hacettepe University Senate adopted the “Directive of the Commission of Protection and Support Against Sexual Abuse and Assault”. Based on this, a Commission was established on 15 May 2019, as a complaint mechanism against sexual abuse and assault. The members of this Commission are appointed by the Rectorate. 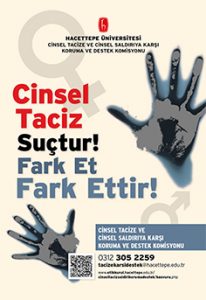